i went to The Curve today. went with Aqilah. we never hang out at Curve together before. so we hit there.

the brilliant part about Curve is, the parking is RM2 per entry on weekdays(weekend=rm3/entry). so things are cool..

we went to Borders cos i was thinking of buying some books.

i remember that someone told me "if you want cheap mangas,go to Borders,not Kinokuniya" so i searched for Whistle,the manga that i suppose to buy 2 months ago. i found that manga, and bought it. only RM27.10!!! oho.

then we went to MPH,cos they said "don't buy story books at Borders.cos too expensive". so at MPH,i bought Alexandra Potter's Do You Come Here Often. i was planning on buying some action book instead of romance book. but still, you can't help to buy other tempting book if that new Dan Brown book is not RM99.90~.

hopefully, that book is good. there are plenty of Sophie Kinsella books tho. but i dunno why i don't like her stuff. and there are TOOOOOO MANY VAMPIRE BOOOOOOKS~~!! what the hell is that?

last time,Gossip Girls start the trend for Rich Kids genre and many books follow that. but now, Twilight take the throne and become the latest subject for books.

annoying really. that's why i haven't bought any Chic Lit book for a long time already,(apart of me not being a high school teenager anymore~)

back to the daily life.

after that, i went to Daiso,this cool Japanese shop that sells one item for RM5 only.EVERY STUFF IN THAT SHOP IS RM5. i know many people said "don't buy cheap cleanser or make up" but i ignore that. i bought this Face Masque,cos it costs RM5.haha. it looks kinda cool,so i bought it. if i wasn't too cautious of my budget,maybe i bought that Bath stuff. or maybe that cool Highlighter.or that stupid pipette.or that compact powder.or that miso soup broth.

so i'm home now after travelling about 50km just to get back to shah alam. both me and aqilah got lost on the way home cos we took a wrong route.

i already finished reading Whistle volume 23,and seriously,i'm MADDDDDD cos the ending is just THAT! and the next volume will be the last volume. and this MANGA IS SERIOUSLY INTERESTING!!!!!!!

something cool in that manga: 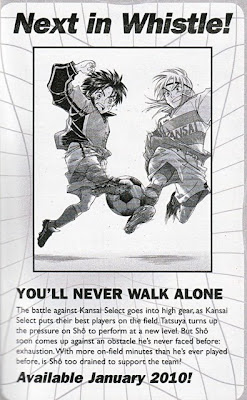 saw that YOU'LL NEVER WALK ALONE???
cool rite??
and another thing, did you see that January 2010???I HAVE TO WAIT FOR ANOTHER 3 MONTHS TO BUY THAT MANGA!

still, that's better than the Saiyuki manga that i dunno when it will come out. i heard it'll be next year. but whatever,there's something i can look for in the future anyway.that's what make life interesting anyway,THE UNPREDICTABLE.