in a place that full of people, especially people like kids that don't even know what KPOP is(little kids: KPOP? is that candy??i want!), or some families that want to bring their kids to some cheap stuff instead of dinner at TGIF or CHILIS like the other modern families or teenagers that only there because...

"oh hey.LETS WATCH SUPER JUNIOR! you know,that Korean group with 13 members. free stuff. and girls will also be there. and we also can make fun of that group"

Super Junior M. performed in a FREE CONCERT. for an event for YOUTH that was organized by the government themselves. 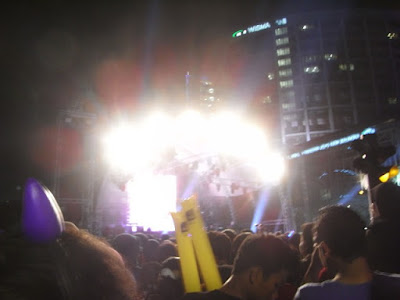 but at least the people that went to the FREE concert knows that the Korean group were Super Junior M, instead of Super Junior... 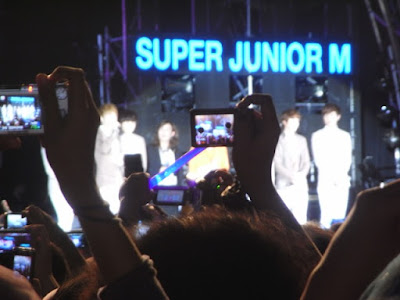 anyway, the mini concert was GOOOD!!!!

it started at 10pm. some of the crazy fans already waited around 3am (expected). we (AliaBaik,AqilahPrasanCute,AirinaCousin) arrived there around 9.20pm . and obviously the place already crowded.

but we were kinda lucky as we managed to get a good view. and lucky the people in front of us were not that tall. (around us were mostly Malay guys,instead of the usual Chinese girls with high-heels. so we got nice view~) and even though some people stood on chairs (chairs that were provided to the 1st-come-1st-serve people).

and oh, i met this twitter friend of mine, @ratnarocks. we couldn't talk much as it was crowded.but still, "hello!!!"

as Airina is the youngest among us, so i gave her this chair that i found in the middle of the concert. (how did i manage to get that chair? 2 fans stood on their own chairs and i was like "SIT!! SIT!!!!I SEE NOTHING!!! DON'T EVEN TRY TO STAND ON THAT CHAIR!! -i maybe exaggerated a little- and those people were scared, so they didn't sit nor stand. and i took that opportunity by taking one of the chair and gave it to my cousin, as she's the youngest and she's the most loyal ELF among us)

anyway, when the clock ticked at 10.10pm, Serena C came out and she was the MC. and both me and aqilah were like "YEAY!!!SERENA!!" cos we love her as a MC. and then she talked some stuff. and she shouted "SUPER JUNIOR M!!"

and then Super Junior M came out. SungMin,Ryeowook,Henry,Kyuhyun,Zhoumi,Eunhyuk. Donghae and Siwon didn't come as both were busy to do something else.

so Super Junior M came out.

and both me and Aqilah were pushed to the front. (i told Airina "don't ever leave that chair!")

and firstly, they sang Perfection.

it was madness really. especially that around us were not even Super Junior fans or KPOP fans (maybe some of them were. they talked about 2PM) and some gave dirty looks at Aqilah whenever she let out her trademark shrieks.

we found a less crowded place which was not that far from our original place (some of the non-fanboys and non-fangirls already bye2), we only sat there because there were some solos that we didn't even care to listen. but as a Kyuhyun's lover, i felt like a very healthy person when he performed his solo that i never heard of. HAHA. 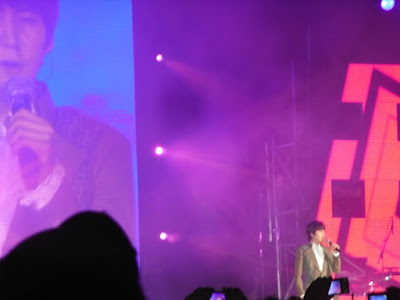 anyway, when i got my energy back (maybe after 1.5 songs?), we stood up and went back to the crowd. we slipped into the crowd, and got ourselves a nice view. nice enough that these 2 people noticed (hopefully they were) my camera... 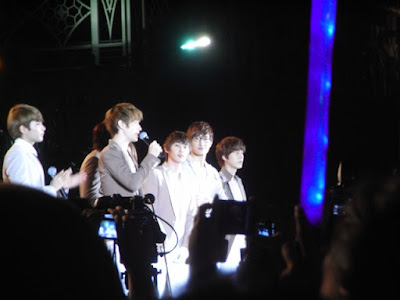 anyway, the mini-concert wasn't all SINGING. they did some Q&A session with some lucky fans. it was pretty unique,the fans i mean. there were fanboy, japanese fan, fangirl that was dragged by Zhoumi after the Q&A cos he wanted to ask more questions to her, a fan that cried in front of Kyuhyun and a fan that asked about UNDERWEAR to Eunhyuk.

another memorable stuff:
and yeah, all of the above happened.

the mini-concert ended. and there was an encore.

the thing about Korean singers (or maybe SM artists cos BEAST were not like that), they love to use their debut song as their encore. so Super Junior M sang Super Girl and i was like "OH MY SUPER GIRL.WO SHI LKAFDKLFJKDJFKDJFKLJDFKL SUPERMAN" with my made-up chinese words. and i screamed like the people around me were deaf, KPOP fans. it was very very nice feeling.

and so, the concert end.

if people asked me what's the good thing about this concert, i'll say "NO PUSHING DURING THE CONCERT"

if people asked me what's the bad thing about this concert, i'll say "THE PUSHING AFTER THE CONCERT" and also the bad audio system.

but overall, it was good that i went to this free stuff. cos seriously, it was a VERY GOOD PERFORMANCE especially for a free stuff that you got from the government. 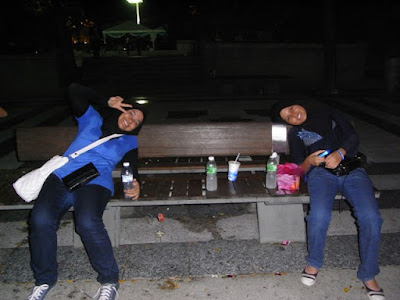