i know i should blog about this MONTHS ago as people already forget about it, but how about you read this post like the party was yesterday and maybe you can go back to the memory lane while reading it.

so i'm blogging about: 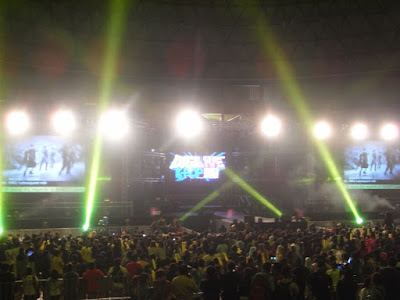 DiGI KPOP PARTY!
a.k.a CUBE PARTY.
(both are fine)

abt 24 hours before the party, i thought i couldn't get any ticket at the last minute cos NajwaGiler told me that the ticket already sold out. i even asked around at facebook,and this one girl was helping me to search for anybody that has extra ticket or something like that. there was a time when i thought the future for me to see BEAST for the 2nd time was dark, that i even told Hani "thanks Hani.but i can't watch BEAST tomorrow" and Hani replied and said "EHHHH??WHY?????I ALREADY BOUGHT IT FOR YOU!!" and i was like O_O and had this sensation to kill NajwaGiler the next time i see her.nevertheless, i was like "WHAT WHAT WHAT??????YOU BOUGHT IT???" and Hani replied YES and i was like "Yo DooJoon.your mistress in on her way".

other story that related to the pre-KPOP PARTY:

as you remember, the fake party was FFA a.k.a Free For All which also means Free Standing and Free Seating. Hani and co. (NajwaGiler,Tiah and NadiaSepet) came early and they saved some seats for me and AqilahPrasanCute (AhHin sat at the RM100 ones). they got good seats;totally at the center,and had a very nice view of the stage.

shame. our seats were almost perfect,if these 2 fake fans did not seat in front of us.

anyway, at the entrance, they gave us this stuff; a yellow plastic thingy. obviously to make more noise in the stadium. 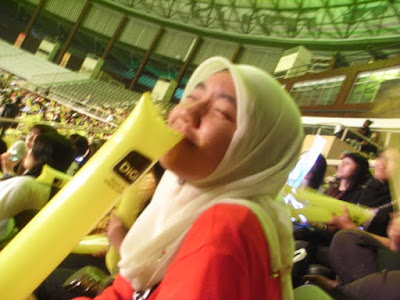 NadiaSepet loves that yellow thingy so much, she wanna kiss it.

the good thing about this yellow stuff: it made the stadium noisy and yellow-y.
the bad thing? you accidentally hit the the head of the people that sat in front of you because you are too excited.

unfortunately, the bad part actually happened. fortunately, i was not the victim.the 2 Chinese that sat in front of me were the victims of that yellow stuff that i HELD.

obviously, they were mad. one of them accepted my apology and had fun. the other one,however, was mad and she was sulking throughout the party. i was like "whatever. i know i hit you plenty of times, but it's not like i didn't say sorry. anyway, i don't think you're even a KPOP fan".

by the way, NadiaSepet told me that BEAST manager, JiYong oppa, was walking near our seats before this. and then, we suddenly saw him near the audio area,or whatever you call it. and he was kinda close to our seats, and so, AqilahPrasanCute used her shrieking voice to call JiYong:

how nice.
he looked at us.
and obviously, as he is a handsome korean man and also a quiet famous one eventho he's only a manager, we SCREAMED when he looked at us(AliaBaik,AqilahPrasanCute,NadiaSepet). and other fans near us,suddenly like "OPPA OPPA OPPA!".

the embarrassing part was, he ONLY LOOKED AT US. he only look. he didn't even wave. or SMILE.it was kinda awkward. i was like "THIS IS EMBARRASSING!!HE DIDN'T EVEN WAVE!!" and me and NadiaSepet were laughing and AqilahPrasanComel still "JIYONG OPPA!! JIYONG OPPA!!" continuously to the point that we should stop her. we stopped her,all because that JiYong oppa only looked at us, but didn't wave or smile or something. but the thing about Aqilah is, she can be clueless when she's too excited. we stopped her, but she said "BUT HE STILL LOOKING". erm...yeah~

anyway,i should start with the actual part.

reminder: if you're a reader of my blog, you should know that i don't really bother songs' name)

(i am skipping the intro part. the part when this unknown host promoting DiGi and dadadadada) 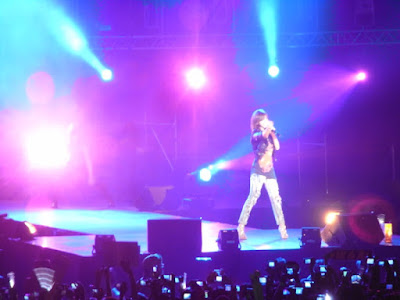 G.Na sang some songs. she sang that famous song of hers,I'll Back Off So Can Live Better.and it was nice. people were screaming their lungs out when JunHyung appeared, suddenly,just to sing his 5 seconds rap.

and as i was a lil bit far from the stage, i couldn't really see her biggest asset (you know what i mean).

anyway, she still beautiful from afar. and oh, like you already know, she forgot some lyrics when she sang this certain Rihanna's song.

oh. she also sang Supa Solo. how do i know? cos i was just started to like her at that time. (no1curr) 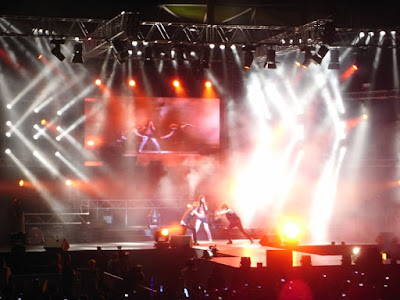 again, i didn't remember the songs that they sang. they sang their famous songs, like "I My Me Mine", "Hot Issue","Huh" and maybe "Muzik". i'm not really sure.

but i can assure you that HyunAh has a very sexy leg. her legs are short, but with that hot pants that she wore that night, DiGi are lucky that JAKIM did not care about any KPop party.

i have to admit, i didn't even know the names of the other members of 4minute. i only know HyunAh cos i was a fan of Invincible Youth. i still don't know the name of the members, but i really want to know the member that did THIS: 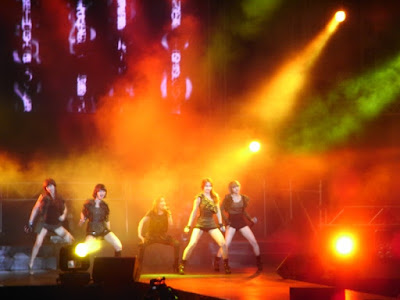 i am referring to the one at the middle.

by the way, when 4minute started to perform, we started to stand. and we saw some girls with DSLR got caught by the security. let me tell you this, you virgin concertgoers: follow the rules.or else you can't enjoy the party.

or maybe the rules need to add something else: no hitting someone's head while having fun. sorry. 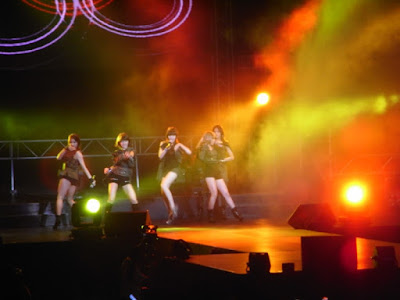 obviously, people were looking forward to see them the most. G.Na wasn't that famous yet. 4minute's fans were mostly 15 year old schoolers and some shy fanboys. BEAST,however, have crazy fans. 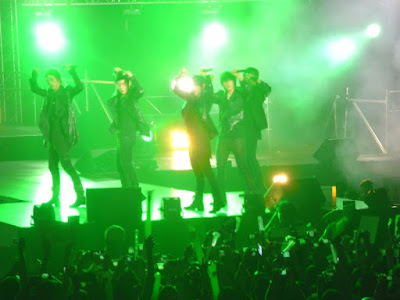 so when BEAST came out, the stadium was booming with voices. fans were loud. fans excited. fans were dancing (me and others). even the securities already gave up on taming the fans.

i, as usual, were screaming DooJoon's name and also DongWoon's name. all because of that NadiaSepet's fanfiction that has this part: Dongwoon is head over heels over Min A-Lya (which is my character's name.HOHO).

anyway, the BEAST boys were having fun on the stage. oh, GiKwang didn't come because he had to shoot for My Princess (i wonder which part, cos i already finish that drama,and you can even count his appearance).

from what i heard, people loves the V.I.U performance the most because they were targeting the fans at that time.

i, however, like the performance when DooJoon showed his brilliant biceps.
heaven. his arms are just NICE.
and i love Stadium Merdeka. it always show me FINE ARMS.

Dongwoon wore this see-through clothes (i think). i wonder if you can see his important parts.

Hyunseung was having fun, a contrast from the previous appearance from him

Junhyung was HOT. i never really notice that.

Yoseop. erm. i didn't notice him. i only notice him when Aqilah started screaming his name. oh well. 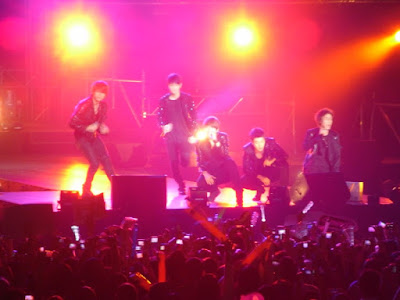 and so we got SUMMORE (some more). they sang V.I.U for their encore.i think.

as the party ended, the 3 performers gathered on the stage: G.NA, 4minute, BEAST.

G.Na talked in English and said thanks and grateful and all.
4minute and BEAST said in Korean and some bits of English;some thanks and all. 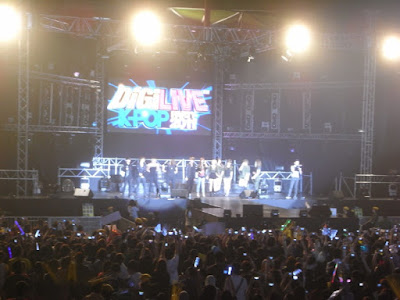 and hello DooJoon~!
and others.... 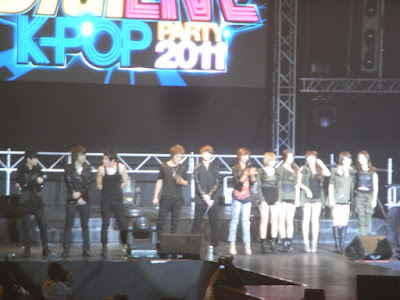 my brother wants to use the computer eventhough it's 1.40am.