i need to blog about this: 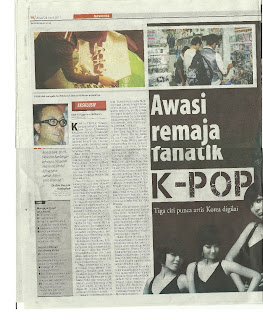 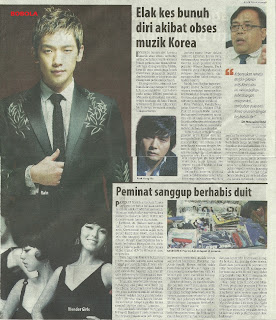 taken from NadiaSepet's blog.
too lazy to even upload it.
i don't even want to read that article.
the big titles are already enough for me.


AWASI REMAJA FANATIK KPOP = BEWARE OF YOUNG KPOP FANATICS
i have to agree with this title.

as i don't even want to read the article, i'll just say this: kpop fans are dangerous. cos i experienced that danger. i had a near-death experience because of it. i experienced stampede after the FT Island's fanmeeting. if i only care about snapping Won Bin's 'BCG' instead of my own, maybe i won't even have the chance to blog about this.


the stampede happened during this time.
still, if you compare Malaysian fans and Korean fans in terms of strength, Korean fans will win. before the BEAST's showcase at KL Live, there were these 2 Korean fans who pushed me and my friends, and maybe some other fans. they did that with their own strength, and they did it fast, very very fast.

they're like these 2 football american players that have power and speed. someone like Shin in Eyeshield 21(2nd best sport manga after Slam Dunk). they're powerful.

Malaysian fans, however, are weak. they maybe can push other fans away. they maybe can create stampede. they maybe can sacrifice their sleep to que for Super Junior's concert ticket at 4am, but no, they are not that strong. those women that fight for empty spaces in the Lady's Coach at that KTM train are way stronger than Malaysian kpop fans. don't believe me? try it. those ladies won't give you any mercy.

BEWARE OF THEM? YES. but you don't need to make it seems like they are that dangerous.

the KPOP people maybe show their legs in those concerts, but they don't even show any cleavage! even the men didn't show their entire abs in that concert.

none of the Malaysian korean fans are even thinking about this!!! why you suddenly said this??? don't you even know that the Malaysian fans might do what you just said??? don't you know this maybe give an idea to those obsessed fans that they'll choose suicide if their idol died??

but as a Malaysian kpop fans, i never ever saw this kind of idea appear in the Malaysian fans' mind. so please, your words might give an idea to people instead of making them be careful.

i thought reporters have to learn psychology, isn't it?

grow up,seriously. this suicide topic is taboo especially in this generation.


PEMINAT SANGGUP BERHABIS DUIT = FANS ARE WILLING TO SPEND MONEY
wow. you just found out about this??

let take this positively: parents know what to buy for their children after this. they can give their kpop-addict daughter a Super Junior's album that only cost RM65, they'll accept it greatly. no need to waste money on Blackberry or iPhone or iPad that'll cost more than RM2000++.

and oh, our country's relationship with South Korea will be better than before too.

we helped their economy, they can help our economy too.

and oh, at least the KPOP fans spend their money on CDs, DVDs, hoodies, instead of drugs, rite?

seriously reporters of Berita Mingguan, your view in this are embarrassing. your paper already made headline with that stupid caricature of Tsunami chased after Ultraman.

do you know what KPop fans did? we unite Bumiputeras and Non-Bumiputeras together: we love Kpop. we maybe spend our money on those expensive merchandise and tickets, but we ALWAYS have respect for each other.

our PM should be proud of our contribution to the nation.

ps: if my opinion is not the same as you, you should just keep quiet about it. we need positivity, not some negativity.

Email ThisBlogThis!Share to TwitterShare to FacebookShare to Pinterest
Labels: kpop