i'll tell you what happened yesterday..

aqilah picked me up around 11.40am,and i saw najwa sat at the front seat,and so i told her "you~sit at the back"

and when we already picked up ainun,i asked them where should we go before we go to Petaling Street. cos Petaling Street only nice around the evening,not during the noon. then after plan and plan,and also after Ainun's story about anxiety disease, we agreed to have Shabu Shabu as our lunch at Times Square.

so we ate Shabu Shabu.

and during the eating, aqilah suddenly got scared cos there was this tiny cockroach at the end of the table,and she ran away from the table with najwa.

ok,ran away is not the word, but pretty like freaked out.najwa freaked out also.so there were 2 bunch of freak out girls cos of 1 TINY COCKROACH.

and all i think about was "dirty restaurant" and the waitress there killed that roach,and aqilah sat back and continue eating. but najwa suddenly talked about some dirty creatures that she scared of such as the lizard,frog and ainun talked about rat,and i also joined in.

and then we had our zohor prayer.

and seriously, it was fun. especially the time when i saw the RM10,RM19,RM20 signs around the shops. trust Times Square to have that kind of price.haha. and i bought this cardigan that i've been searching for,and then to the MUST-GO place for me at Times Square, that is,THE CD SHOP.

and i bought 2 DVDS; Orthros No Inu and Atashinchi No Danshi.

then, went to Sg Wang cos we wanna take our group pics at the Purikura at Sg Wang. tell you this, the only place that i trust to have a good Purikura pics is only Sg Wang Plaze. other than that, FAIL. One Utama and Sunway Pyramid's purikura are hideous. seriously. it's like the photobooth that you take for your passport pic.

the crazy part was when we had to edit the pics. so i put this pig's nose at Najwa's nose. and then Najwa put a pig's nose at mine. and then both of us thought that it should be cool that we put another pig's nose at Nazneen's nose. but i accidentally erased it. cis! and then the lady who handled the purikura there came to us asking if we already done our edit, and at that time, we were thinking of putting the pig's nose at ainun's nose. the lady took the pen(for the edit) and put the pig's nose at ainun's nose. SHE WAS THE ONE WHO DID IT AND NOT US(najwa and me). ainun at that time was going somewhere,and when she appeared,she saw her picture with a pig's nose, and i told her "SHE DID IT!!!!" i pointed at the lady. and the lady looked at ainun with a......i-dunno-what-to-say face.but she was kinda smiling tho.ahaha. 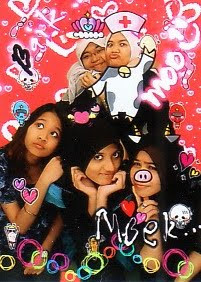 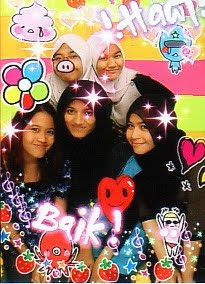 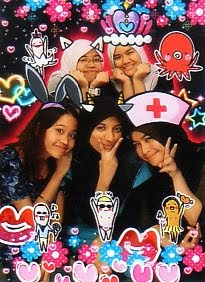 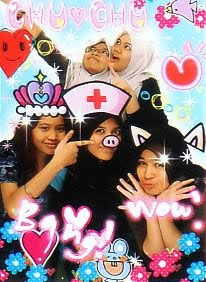 see those piggy's nose?
aqilah got the craziest poses.and nazneen got the nicest ones.

and u know who did the Baik word.ahah!

after that, we went home eventho we planned to go to Petaling Street around the evening,but someone had a curfew. so in the end, we went home.

and on the way home, we were like karaoke-ing in the car, and so i told them "LET'S GO KARAOKE TOMORROW"

and so i expected to eat Takoyaki today.

but that certain someone have to take care the house, and asked us to postpone it to another date.the karaoke,i mean.

and bcos i'm nice and also free in this month of the december,so both me and aqilah said ok.haha.