ok,i think i have the mood to blog.

went to the KLIA around 4.30pm. the plan was: aqilah's dad sent us to LCCT.but few minutes before 4pm, aqilah told me that her father got a sudden meeting to attend. so he couldn't send us.

so all we can do was call the taxi.

so my maid called the taxi,and instead of LCCT,she told the taxi-man that we're going to KLIA.

so the taxi-man took the route to KLIA instead of LCCT.and he blamed my maid for it.

and my father had to pay RM65 for the taxi just bcos that taxi went to a different route.

anyway, at LCCT,after we checked-in, it was around 8pm. the flight supposed to be at 8.30pm,but then got delayed to 9.15pm.

the mood was a lil bit intense when the DELAY word was announced. then, another announcement: my parents went to the announcer, they were really mad.

reason of the delay: bad weather at Bandung. so the plane can't fly.

i'll try to be positive.

around 11pm,an announcement told us to que up to go to the plane.

went to the plane.

i was laughing my head off when i saw this:

aqilah scolded me for laughing at this. she shouldn't do that tho.she also laughed seeing this sign. tho she found out the meaning of Sabuk Pengaman after 20minutes in the plane. da~

oh, aqilah sat beside the window.we let her sat there cos she's really excited.haha. 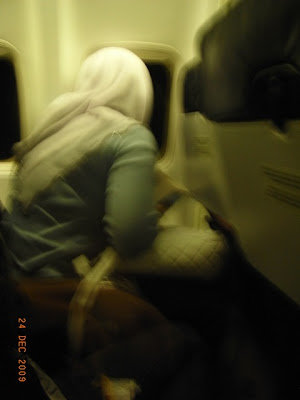 see how excited she was??
then, the steward gave us this form.i mis-wrote something on it. instead of Place of Birth, i wrote my date of birth. i told the steward that i wrote wrongly. then he gave me a new form,and some EXTRAS to my father.

reason he gave that EXTRA forms:


obviously, the 3rd point is the obvious and logical one.

then,around 1am(Bandung time), we arrived Bandung. it was raining before we arrived. so it was cold. and my father already remind me that Bandung will be 24degree celcius at day, and 18degree at night.

and it was midnight,so yeah.18degrees welcome me.
then, after i got my baggage, got into my first car at Bandung.it was an Avanza. saw many signs that i never learn in my JPJ test.

then arrived at the guesthouse. FYI, we(my family,aqilah and i) stayed at a guesthouse,not a hotel or chalet. it's called Cassadua. the place is small, small tv with plenty of channel that i could even watched 1N2D and Liverpool vs Wolves from the tv there, clean bathroom, no insects(only at my room tho), breakfast on bed(they sent the breakfast exactly at 7.30am to our bedroom),shy workers, aircond but not really needed.

i don't have any complaint about this guesthouse. i don't care if the room is small. the room is smaller than my bedroom at home, but my days at Bandung spent mostly outside the room,so who need a big room anyway. 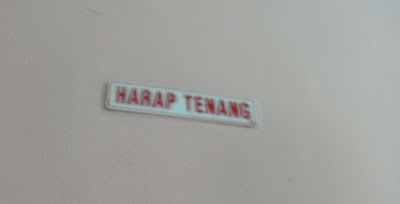 and also, the room is cheap. that's the condition my father told my cousin when he told her to book for the any hotel at Bandung. the hotel must be rm100 and below for 1 room,and this guesthouse is top of the list. it's cheap. 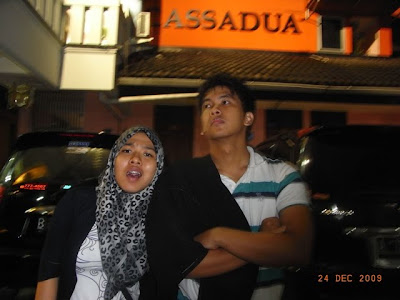 then,all of us went to sleep.

and for the 1st night at Bandung, someone like me that never been to any cold places except Genting Highland,Cameron Highland,Snow World@Genting and Snow House@Mines Wonderland, i dunno how to adapt with the coldness of Bandung.

so, i set the air-cond to 21degree celcius. and i wore that Banc sweater.

and seriously, i should set it to 25degrees. or maybe i shouldn't slept under the air-cond,cos that night was 1 of the torture-st night for me. i nearly die(not really).

lucky that my phone already has this Azan software.so i know when is Subuh. got up around 5am. and fyi, Bandung is 1 hour late than Malaysia.

and that's all for the Part 1.