before that, i remind you first the reason why i want to blog about this trip in a very detail way.

this blog is like talking about my past, my diary.when i become 50, i'll look back about what happen in this blog. maybe one day, i'll print my blog.

hopefully, Blogger won't go bankrupt or something that related with that cos all the things that i blog will be gone. 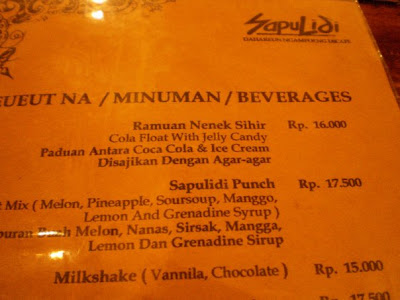 on the 3rd day, around 9pm, we already prepared to go to whichever place my parents plan to go.

the night before that, the plan was going to Tangkuban Perahu, an active volcano that 30km north from Bandung. but my 2nd bro,Haikal, is really scared. he chickened out cos he scared of the earthquake that might happen and also maybe,that volcano will suddenly erupt,even though he doesn't even know that the lava already boiling up inside the volcano, but he still scared. so we had to change our plan to Kawah Putih,a crater at the south of Bandung. Noi recommended us to go there,cos there are no volcano even though it's a crater. 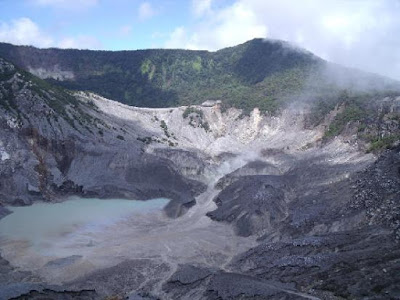 this is the Tangkuban Perahu. 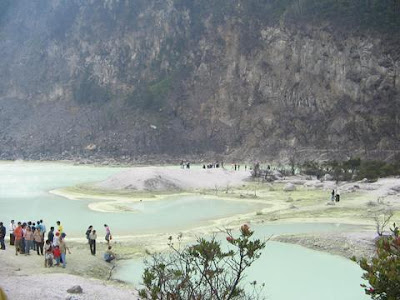 This is the Kawah Putih.
obviously, Kawah Putih is more beautiful than Tangkuban Perahu. but Tangkuban Perahu is a volcano. Malaysia doesn't have any volcano. holiday means going to places that our home don't have. but still, somebody chickened out.

anyway, bcos the plan was change to Kawah Putih, i'm still happy. cos at least i can see something of Bandung other than the traffic jam, the 80% discount banner(as much as i like it), trolleys that sells Nasi Padang and also Kijang(it's Unser btw).

so, at 9pm, we already in front of the guesthouse. the Supir haven't arrive yet. the Supir suppose to be a punctual man,but he didn't. but still, 5minutes after that, he arrived.

oh btw, Noi didn't join us for this 2nd day trip. she hung out with her friends.

we didn't straight away go to Kawah Putih.instead, we went to Pasar Baru, something like Pasar Siti Khadijah at Kelantan. i tried to shut up my mouth while we were there. cos obviously people will know that i'm a Malaysian,so they won't try to fool us. but nope, maybe our clothes,or my aunt who did the talking that make people notice that we are Malaysians. 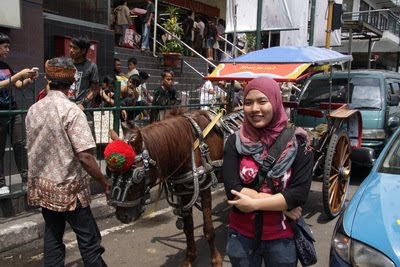 anyway, my aunt and aqilah did the shopping mostly. aqilah had to buy something for her relatives, and i saw her calculating quietly without us notice. haha. anyway, mostly, we bought telekungs and batiks. i got some to make baju kurung later, and i bought telekungs for acu and mak yang. only for mak yang cos she was the one who said she wants it.haha. 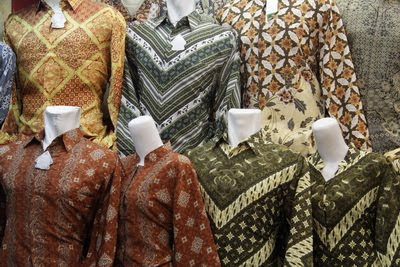 btw, that Pasar Baru got many guys that sell drinks and food. and they kinda like forcing us to buy it. and when they said "beli kak,beli." and when i looked at that guy, then looked at the things that he sell, he suddenly came to me. i was like . he got near, and i ignore him. seriously, there are many guys like that. once you look at the things that they sell, they straight away come to you,demanded to buy anything that they sell. frightening really.

then, about 1pm, we went to Toko Tiga. Toko means Shop(kedai). it was quite famous in Bandung. Toko Tiga mostly sells jeans.from Lea to Levis. again, i bought the branded stuff. haha.

and btw, this shop sells original jeans,so it is more expensive than the shop that i went to in Day 2, but it is cheaper than the one in Malaysia.

like this Levis jeans that i asked my father to buy for me. it cost about 299k rupiah,which is equal to RM78 in Malaysia. see how cheap it is??

and you know, i dunno if i got thinner or what, but my Levis measurement is 26, instead of 29.

at that shop alone, we spent more than 3 hours. and i think maybe bcos of my brothers, that really love jeans eventhough they have many jeans already, unlike me that have only 3 jeans, and 2 of them already 2 years of age. prayed at that shop with smokers behind me. 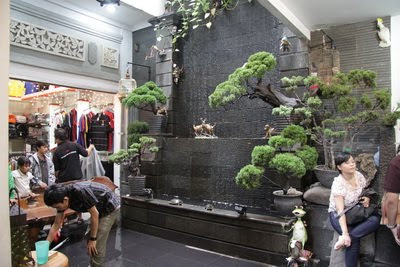 inside the Toko Tiga 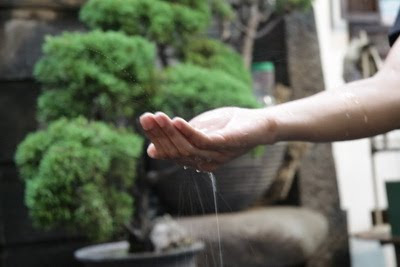 oh, fyi, there are many female smokers in Bandung. too many,that you can even see it in the Musolla.

then, off we go, to i dunno where.

and bcos it was already 4pm,and it was raining heavily, so i asked my father, "are we going to Kawah Putih?" my father said "we can't. cos we don't have the time". i was devastated. seriously. apart of being happy for having my 1st Levis jeans in my life, i was really,really upset.

but i tried to control it.

dunno if anybody notice tho.

my brother was the happiest when he heard that we're not going to Kawah Putih. he thought a crater is a volcano.

then, my father asked the Supir "any place that you know that we can do something and have a nice view?"

then the Supir said "Kampung Daun"

so my father said "Kampung Daun then" 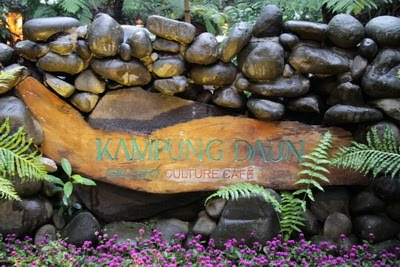 40minutes after that, after surviving the horror of traffic jam, we arrived at Kampung Daun. and the view was breathtaking. it was awesome. i can't say if it's better than Kawah Putih or Tangkuban Perahu, cos i can't compare something that i haven't been to.

Kampung Daun is a restaurant,on a hill, that set in a natural place. Natural, as in a forest. a Hill,as in a High place.so the tables for you to eat is on the hill, and you walk uphill.it's like walking to my faculty,but with a nice view with me. 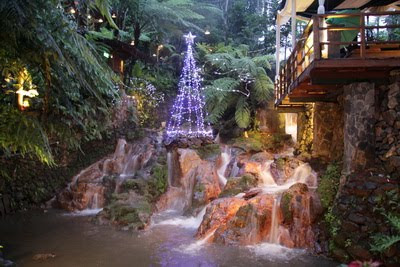 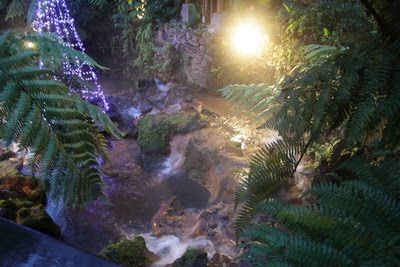 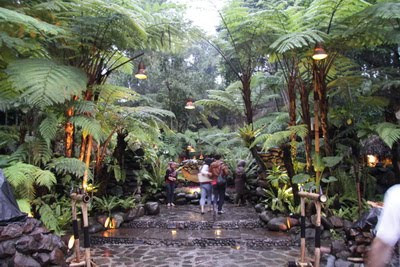 we love nature, so obviously,we become together with the nature: 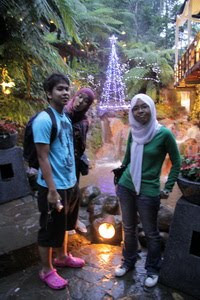 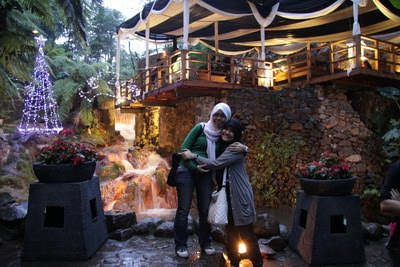 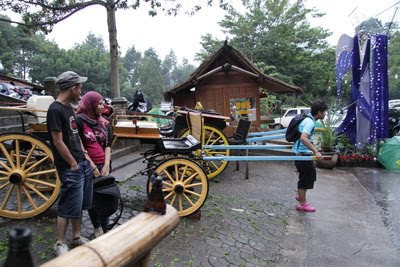 the food at that place is delicious IF you choose the right food. me, however, chose a wrong food. i chose this Nasi Bakar Sambal Belut. obviously, i thought the Belut(eel) will be like Unagi, as it is the same thing. and i also ordered this one cool drink called Italian Naughty Mocha.

no need to taste the soft inside of the eel as the eels don't even have any inside meat.

again, i was devastated. 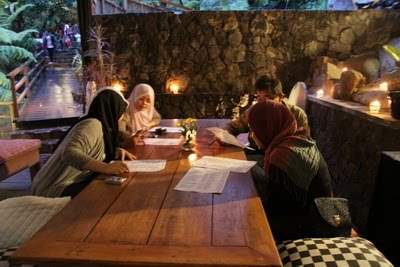 order.
after the dinner. we went home.

slept quite late after that cos i watched Liverpool vs Wolves after that. aqilah joined me watching it. and as much as i was happy that match ended with a win, i couldn't really enjoy myself for it cos my sister was being grumpy cos we disturb her sleep.

Day4 will be later.