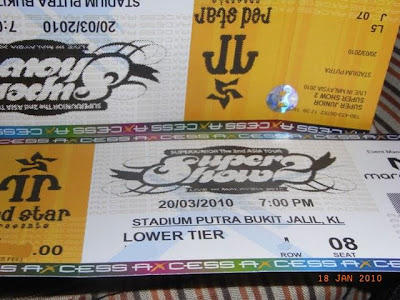 don't want to waste my time to think about when to buy the tickets after this.haha.

the pre-sale started today. so went to Sg Wang with Aqilah after class. and went straight to the place that sell the tickets.

arrived at the place, and we saw a long line of people in front of a big Super Junior poster,and we really were surprised cos we never thought the place will be THAT crowded,cos you know, being first day of pre-sale and all.

2 chinese girls behind us asked us something "tumpang tanya(yeah.she totally said that). dah lama tunggu ke?"

so we waited. saw many chinese BOYS. yeay! FANBOYS!!!! and more handsome than afiq!

a Malay girl in front of me was sms-ing someone. maybe her friend or boyfriend. saw something like "kalau rm138 dah abis, nak tak rm238?" i was like,whoa. already sold out eh?? it's only the 1st day la.

then saw dis chinese woman in front of that malay girl. she was holding a form about the concert.something about which tickets we want. heard that she said "semua orang kene ade this form" so i pulled aqilah and pushed her to take that form.hahaha.sorry aqilah.

then, we filled the form. 3 tickets. and the price are dot dot dot (i think you can guess which ticket i bought).

the chinese girls behind us saw what we chose. she said the tickets that both me and aqilah wanted to buy was at another line. so we went.

A VERY SHORT LINE WAITED FOR US.

paid the tickets and got it.

bought tickets for me, aqilah and ahhin.haha.

and i got this free giant poster offer with me,but i have to claim it this 31st January. dunno if somebody is free to take it for me. ps: some of mikrob peeps asked me about the SuJu thingy. even Nadia the genius even excited about it.nice

some extra from my crazy cousin: