what happened in TG MALIM.

last week,i went to Umah Atuk. from the word,you know that was my grandfather's house. anyway,it's at tg malim btw.

we(my bro,sis and me) off to tg malim around 6pm. and we had to use the Kancil instead of the Proton bcos as u all might know, my sis hit someone's car with the Proton,and so,my father had to spend RM510 to pay for the rapair and all.

back to the tg malim part.

The Kancil btw,has a BROKEN RADIO. and my brother wanted some suasana,and so,he told me to play the songs from my phone. so,from shah alam to tg malim,from K's only human to Big Bang's Lie,we listened to MY SONGS. hoho. still, i'm not just j-pun and k-pup fan, there still english songs for my dear brother and sister to feel relief about.aha.

anyway,when we arrived tg malim,it was nice.people asked us a lot of questions.we already prepared the answers for the "taknak tido sini ke??" and all of our answers were easily accepted by them.

only 1 of them is correct. SORRY,SORRY!! 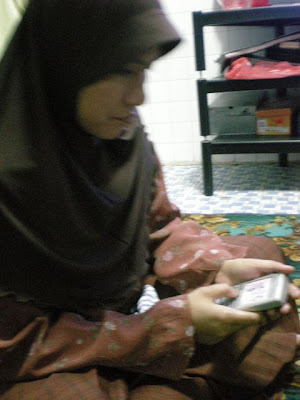 acu was looking at my phone,and she saw my calendar,and she said "whoa.TVXQ gathering~~" i was shocked but lucky she doesn't know what's TVXQ is.haha.cos you know,she'll be mad if she know i went to a Korean band gathering instead of UiTM's LDK.
anyway,i went to the living room,and i saw acu. i think she gained weight again,but i didn't say it outloud.UNTIL! when she saw me and....

and then,we had solat jemaah. after that,we recited the yassin. and after that,i sat at the corner,and my dear little cousins who now become my closest cousins came to me.

age of the cousin: 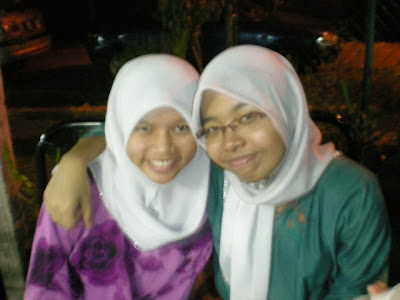 this is me and aqilah.hoho. i'm easily the favourite person among the little kids. at least all of them are above 10.

and then,the people in the house got ready to dine the food.

and when i was at the kitchen,(a large kitchen btw) acu was with us(my sis and i) and suddenly,she talked about BULU KAKI. no need to explain more about it cos it'll effect the pride of a Mother with 4 kids and also 2 girls that don't have any boyfriend. 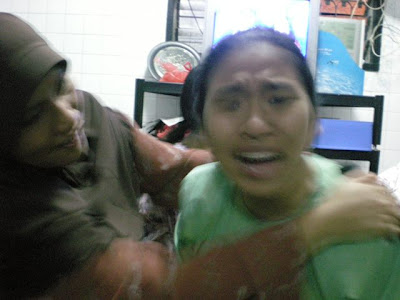 something ridiculous happened between them that made my sister's face like this. 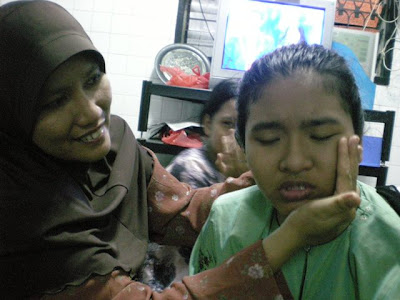 and after that,the guests arrived,and i went outside.my brother was with my cousins and he told them that he has a stalker and she's my sister's friend's. and then,this cousin of mine,Ammar,came to me.and he asked me who's that guy at myspace (the one with me and afiq) .and he assumed that's maybe my scandal. 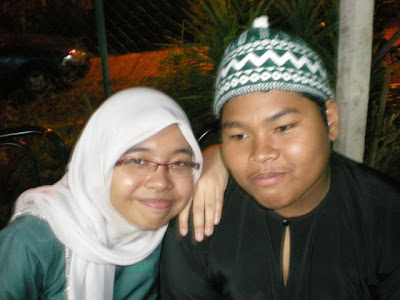 ahaha. my new scandal!
and then,cos my brother wanted to go home early,so we went home around 10pm.