i took this from bbc.

quite interesting.you know what the lifestyle of iraqis right now.sad and funny at the same time.but still,it mostly sad.hrm.but not that sad.iraqis demonstrate the way to cope with the war in their country.

Viewpoint: Laughter in the dark 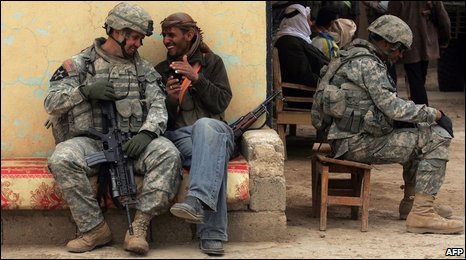 Iraqis are known for having a wicked sense of humour

An Iraqi member of staff at the BBC Baghdad bureau has been sending his impressions of life in his hometown. In this instalment he considers the lighter side of an often dark situation. For security reasons, the author's name is not being published.

There is a special intensity to the experience of life in Iraq. You laugh more and cry more. And as often as not, you find yourself doing both at the same time.

The humour of the people of Egypt is well-known in the Middle East. Some believe it is born of crippling poverty - if you've no other choice, you have to laugh the hardships away.

The same is true in Iraq. Except that, in addition to poverty, we have daily, random violence, foreign soldiers all over the place, a state sector riddled with corruption, and public services that have fallen to pieces.

So we laugh all the harder.

The other day, a colleague went to the computer market in the centre of Baghdad. When he got back he told us he had been scared stiff.

As he walked among the stalls, a taxi screeched to a halt and three men plus the driver leapt from the vehicle.

Everyone scattered in panic, thinking it was bound to be a car bomb and the men were about to detonate it by remote control. Chaos followed.

It turned out the men had simply stopped their car in a no-parking zone and were hurrying to do their shopping before the traffic police showed up.

It's like another story I heard recently; a young guy was staring lasciviously at a pretty girl on a public minibus.

An older man, indignant at the youth's shameless behaviour, but not knowing how to intervene, called out "Allahu akbar" (God is great) in an attempt to bring the youth's mind back to more pious thoughts.

Of course, all the other passengers drew the natural conclusion, that the old man must be a suicide bomber and the shout of "Allahu akbar" meant he, and they, were about to meet their maker.

The bus driver pumped the brakes and the passengers fled screaming in all directions.

Should we laugh at their discomfort? I don't know. But what else can you do?

Here are some of the jokes doing the rounds in Baghdad these days. You may find them funny, you may not.

- A guy stoned on drugs is driving his car when he's stopped by the traffic police enforcing the new traffic rules. "Why aren't you wearing your belt?" they ask him. "Because I'm not wearing any trousers," he replies.

- A guy with cross-eyes volunteers to join a militia group. They assign him to the random bombing unit.

- A Jordanian finds a magic lamp. A genie appears and asks him what is his heart's desire. "Send all these Iraqi refugees back across the border," the man says. "Why?" asks the genie. "Whatever have we done to you?"

- A Indian man is tossing and turning in his bed in the middle of the night in his hovel in the country's poorest slum, and then he wakes up screaming. "Oh God! Please! No!!!" he yells. "Calm down, darling. It's just a nightmare," says his wife. "You're right, my love," he says, catching his breath. "But what a nightmare - I dreamt I went to sleep and woke up in Iraq!"

Quite. A nightmare indeed.

source:bbcnews
as blogged by Alia Liverpool at 2:20:00 pm